Treatment of Stomach Worms in Humans

To treat Stomach Worms in Humans, a herbal plant named as ‘Ajwain’ or Thyme is often used.
Thyme is botanically known as ‘Thymus vulgaris Linn’ and is popularly named as Thymus. In Hindi language it is called Banajwain or Jungali Ajwain , In Punjabi language it is Marizha, Masho and Rangsbur and in Urdu language it is known as Hasha.

Thyme is similar to Mint herb with smaller greenish leaves and plethora of whitish, pink small lilac flowers. It has got a pungent minty aroma which makes it distinctive from other family herbs. Thyme is slowly gaining its reputation as a medicinal plant because it is being now increasingly used for skin troubles and in hypertension treatments. Besides it has also other medicinal properties. We can use this herb very effectively in the treatment of Stomach Worms. 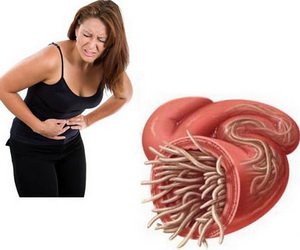 Thyme tea is made by the dried leaves which gets curled and look brownish green color, usually 5 to 6 mm in length. Their flavor is aromatic, warm and pungent.

Take the following ingredients for preparation of herbal medicine to get rid of Stomach Worms.

Pour water in a pan and let it be boiled. When the boiling point has reached, switch off the flame and pour Thyme Tea and the Ginger roots into the pan. Let the whole ingredient cool down in natural way. Stire the whole substance 2-3 times in between the  preparation period. Now strain the cooled liquid in a pot and add flour to it by stirring thoroughly. Store the preparation in a refrigerator.

Divide the whole preparation into two halves. Consume one half in the morning just after the breakfast and the another half in the evening just after the dinner. After consuming the preparation chew 2 cloves. Repeat this process for 2 weeks to cleanse your bowel completely from the intestinal worms. This medicine is very effective to naturally Kill Stomach Worms in humans.